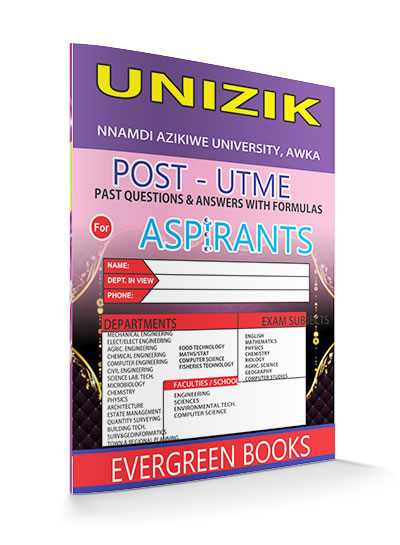 FEATURES OF UNIZIK POST-UTME PAST QUESTIONS & ANSWERS FOR ARTS

Questions for UNIZIK POST-UTME for Arts-based courses come from these subject areas:

SAMPLE QUESTIONS OF UNIZIK POST-UTME PAST QUESTIONS & ANSWERS FOR ARTS

3. Land is a factor of production because it

(C) assists in the creation of utility

4. One of the advantages of large scale production is that

(A) there is a risen in the cost of administration

(B) consumers sacrifice their individual tastes

(C) the firm can use labour-saving machinery

(D) the demand for a firm's products becomes localized

5. The major role of national legislature is to

(A) scrutinize and criticize the executive branch

(B) fill into political vacuum created by weak executives

(C)  expose and supervise the government

(D) make law for the general welfare to citizens.

6.The essence of the constitution of the United States of America is that

(C) it is a peculiarly North American document

(D) it protects black Americans at all times

8. The universe has a large collection of sporting....

HOW TO GET UNIZIK POST-UTME PAST QUESTIONS & ANSWERS FOR ARTS

Make a bank transfer or deposit into Text your name, email address and name of product order to 07037538700. Then check your email inbox in the next 2minutes.

Pay online, download a full and updated copy of the UNIZIK POST-UTME Past Questions & Answers For Arts and also get it delivered to your email box by clicking the Order Now Button. Please, note that we don't back out after sales!
Order Now

DISCLAIMER
StudentsHub is an academic resource provision portal and is not in any relationship whatsoever with the agency or body whose resource material is shown here. This book contains their past questions, practice questions and other useful resources for their tests. We hold and have no other ties or links with them.
TAKE CARE AND BE FRAUD-PROOF!
This item has no review yet. You can buy it and submit your own review.